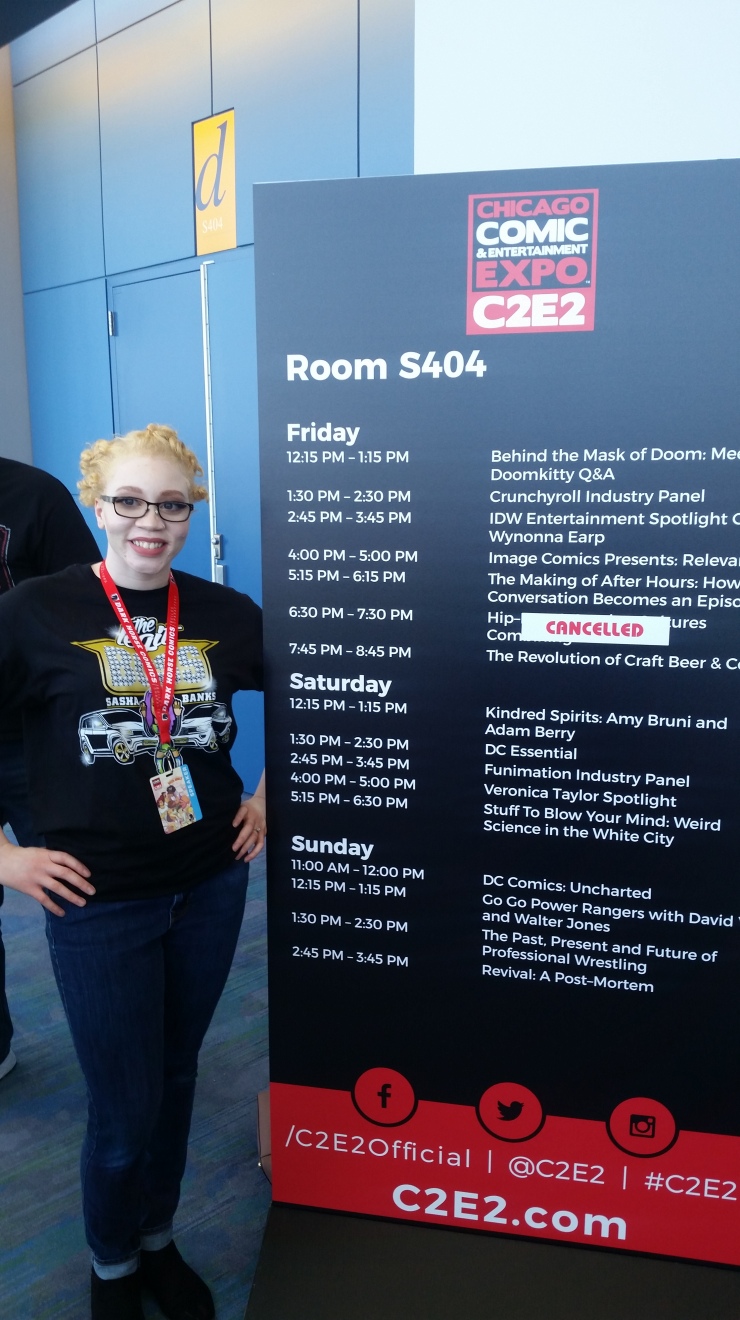 On April 23, I had a unique opportunity to speak on a panel at C2E2. How you ask? Let’s go back in time a bit.

I was asked by a former professor shortly after I finished my degree last March if I would be interested in speaking on a panel at the Midwest Popular Culture Association’s annual conference taking place in Chicago in October. I agreed with a “what the heck” kind of attitude. The panel was about fandom in general, but myself and the other panelists could each choose a specific fandom to discuss. I immediately decided that I wanted to talk about professional wrestling fandom, since I had recently rejoined the fandom at the beginning of 2016.

As the months rolled by and summer turned to fall, I started to close in on my main points for the panel. I spent the last couple weeks of September creating notes to accompany the PowerPoint I created, my eyes fixed on the early October panel date.

Once the day finally came, I went to the MPCA conference with three of my peers. Rocking my very first Sasha Banks t-shirt, I presented my analysis of WWE fandom and it was well-received by the people listening in the small Hilton hotel room.. Not only was I asked the most questions at the end of the panel, but I was also stopped by people after the discussion was over who were curious about how I felt about this or that. I ticked the MPCA conference as a victory in my head, and moved on.

The Monday after the conference, I received an email from a female professor at Dominican University asking about my presentation within the panel. I explained to her my part, and she responded with a declaration that she wanted to pitch a professional wrestling panel to C2E2 the next year. She asked if I would be interested in being a part of it. After doing laps around my apartment, I regained my composure and replied affirmatively. The professor would keep me updated on the approval status of the panel.

In January, she was given the go-ahead from C2E2 for the panel, and after six months in the making, I finally got to sit in a large room in McCormick Place to talk about wrestling.

So how did it go? The panel itself was more easygoing than I expected. Surprisingly, there was less preparation I needed to do for C2E2 than for the MPCA conference. The panelists were emailed the questions for the panel a few days before, so I had ample time to marinate on my answers and what I wanted to talk about. During the panel, once I got over the initial “holy shit this is happening and this light is shining in my eyes” feeling, I relaxed and realized all I had to do was remember the answers I had come up with to the questions we were being asked. It was a bit disconcerting to know that I was the only woman AND person of color on a panel of white men, but I ignored this fact of representation in favor of getting my points about diverse inclusion in wrestling across.

I was pleased to chat with a woman in the audience after the panel who walked up to me to tell me what a good job I did. She said she was glad to see that I could hold court with the men on the panel. Decked out in a Bayley headband and wristband tassles, she was smiley yet intimidating — ironically, like many of the female wrestlers I watch on TV every week.

Speaking of that, I did see my favorite female wrestler in my childhood years, Lita, in person. I didn’t speak to or take a picture with her, but I stood close enough to breath the same carbon dioxide as her. After searching for her booth with my fiance for a good 15 minutes after we arrived, I finally laid eyes on her, almost passing her. Taken by surprise at seeing a real-life famous person, I hid behind my fiance and yelped “That’s her! That’s really her!” And after my initial freakout passed, I got a weird feeling. There Lita was, standing right in front of me. Talking to someone behind her booth, touching, taking pictures with fans. The same Lita that main evented Raw in 2003 in a match where she fell on her torso so hard that it looked like she broke herself in half. The same Lita that wrestled Trish Stratus in the latter’s retirement match. The same Lita I looked up to as a different kind of girl growing up, was standing right in front of me. A smaller woman, average height. No discernible muscles could be seen under her zip-up black hoodie, black t-shirt and loose fitting pants. She wore sneakers. Her hair a faded auburn brown, as if she was due for a touch-up dye job. 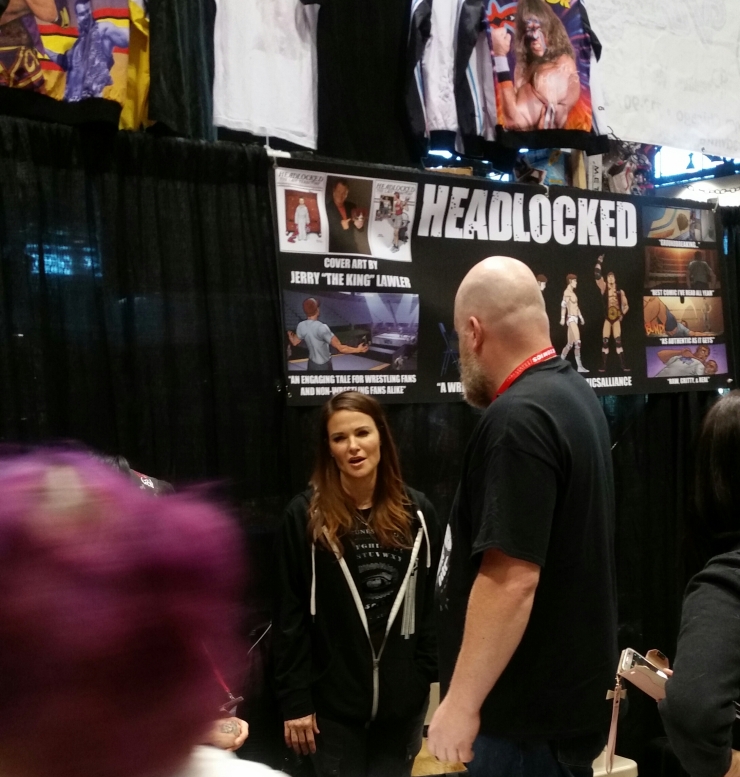 And it wasn’t until after I’d left C2E2 that I figured out what this feeling was. As enamored as I was to be under the same roof as one of my childhood heroes, I felt underwhelmed by her presence. Even though I kept pacing her booth whenever I got the chance while I was there, it wasn’t because she was famous that necessarily caused me to do this. It was the fact that she seemed so unfamous to me. Lita, despite her fame and success, was just a person. And that was the comforting thing I realized about C2E2 as a whole convention; a bunch of celebrities agreed to come and sit with fans to talk about pop culture. They were there, in the flesh and on the show floor with everyday people. Every celebrity that came to C2E2 at one time was an everyday person, but they didn’t somehow lose their personhood when they got their big break. They’re real, they live real lives, and they don’t just exist in a vacuum. When you meet a celeb or see them in person, you may realize like I did that they are not more human than you. I can think of a million different ways to say this, but it was oddly comforting to me as an aspiring writer to realize that in order to reach fame or prominence, you don’t ascend to some higher state of being.

The same idea applied to my other childhood fave that appeared at the con, Rey Mysterio. While I didn’t sit as close to him (since he was on the Main Stage on a panel), still sitting and seeing his face on the big screen, knowing that his tiny self was sitting yards away humanized him for me. He talked about his son just turning 20 and how time has flown, just like any parent would. It was gratifying to see wrestlers who shaped my childhood and love of wrestling for the people they really are. 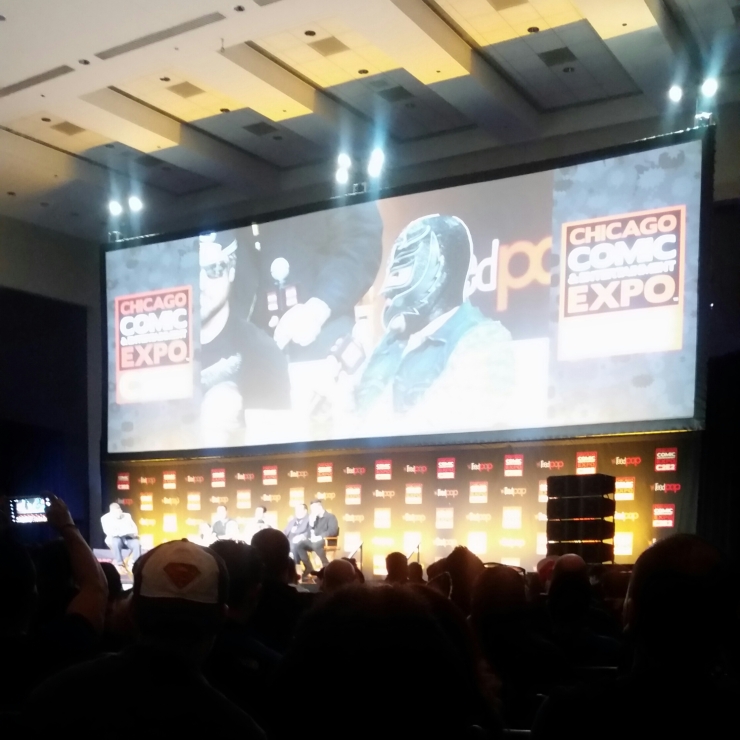 Before and after my panel I was able to walk around the floor with my fiance. It was definitely a cool experience and opened my eyes to how hard the organizations and artists at C2E2 worked to give the best presentation of fandom to all of the guests who paid to be there. That said, my fiance and I would have enjoyed the con more if we brought money to spend on all of the awesome artwork and trinkets we saw. Or, to take pictures or autographs from celebs at the booths (like Lita). Because we had no cash, the most we could do was ogle at everything and smile at artists as we slowly shuffled away from their tables. I did get a Wonder Woman comic with the two dollars my fiance had in his wallet, so I at least got one physical takeaway from my experience.

I hope to come back to C2E2 next year or the year after to truly get the whole experience. But for now, I’m satisfied I was given such an awesome opportunity by sheer happenstance. Follow your path in life where it leads you; you may be surprised what you get in return for your faith.

What are you looking for?